If You’ve Shot Your Shot & Missed, You Can Relate to These 15 Experiences 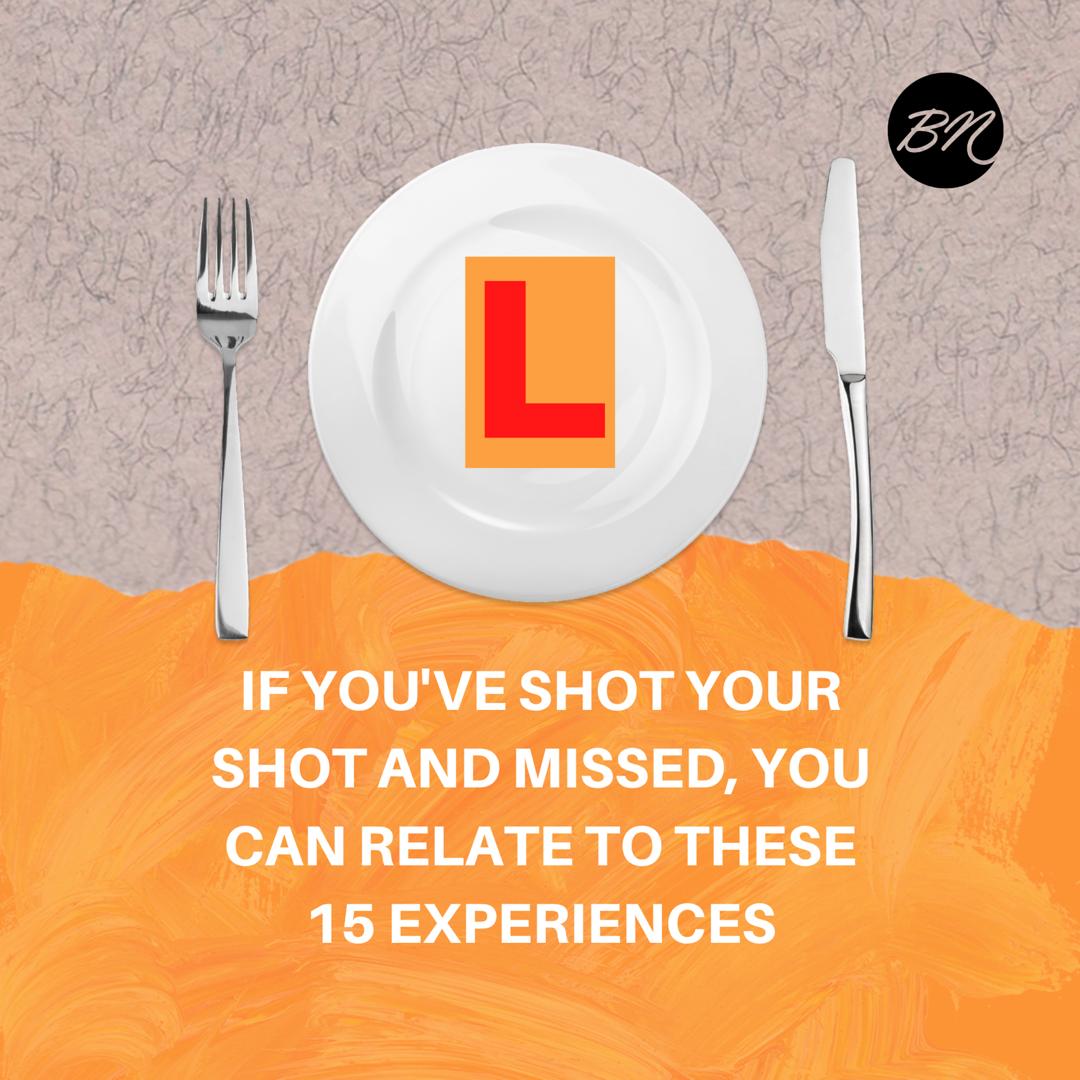 Remember all that effort you spent creeping on their social media, composing and re-composing your first words, sending that text, and then spiralling into the tense aftermath of sending that text. Did it yield good result, or you just shot yourself in the leg?

These BNers have shared a time they shot their shot and missed the target.

We asked the question on our social media pages, and we got several interesting answers.

Tell us about the time you shot your shot and it went over the bar.

Or was it punched away? Or it hit the bar and came back to you? Tell us

“Recently o and I was just pushed to the friend zone, it’s actually my first time trying to shoot my shot and it ended in teaesi” — Boluwatife

“He told me straight up he didn’t want to be with a teacher, that he wants a career lady. For one week I no get myself. Las Las, everybody go dey alright” — Sophia

“So, I saw someone’s picture on twitter and thought JACKPOT! Ahan, baba you fine die. I shot my shot like damn “God dey create sha “ slid into dm. Anyway. He’s years younger than me so he’s my younger brother now” — Oluwatipsy

“Lol. I had a crush on this guy since my secondary school days. Now we are all grown up. I gathered courage to tell him. Omo I’ve been sister zoned” — Abimbola

“I shot my shot, and he said “let God take control of the situation”. Please can someone explain to me”. — Omotomilola

“I went to his house and cooked, cleaned….. He called me 2 weeks later for egusi soup recipe that he wants to surprise his girlfriend….. NEVER AGAIN” — @perf_boss_

“Sometime in 2007, I visited this friend of mine in his house. He asked what I want to be entertained with, I said “you” He is my husband today. It’s a whole journey and I will be sharing the story soon” — @magicalmarriageng

“Omg shot my shot, mentioned him on my insta story and he instantly blocked me” — Christy

“My close friend finally summon the courage to tell this girl “I think you the one my heart draws to but I don’t know what you think.” Aunty replied saying “It is well bro”…  He’s still recovering” — Gabriel

“I already composed my message a week earlier, prayed for the courage and then I hit send and went offline. my heart was doing me somehow, after two hours I went to check if he had replied guy said “you were my little wife in pry sch” TF that meant, But never again” — Nana-Aisha

“Hmmm! I can’t never shoot any shot laye laye! I would rather perish the feelings than shoot it” — Amnell

“This story of mine, whenever I remember I knock myself on the head. I shot my shot, and dude said he’s trying to date someone else, I never felt so useless in my life. Thankfully I kukuma moved one and now he is dying to be a a friend but I’m happy with someone else” — @nakumaatheafrican

From all of these, certain things are sure:

Tell us about that time you shot your shot and missed the target?