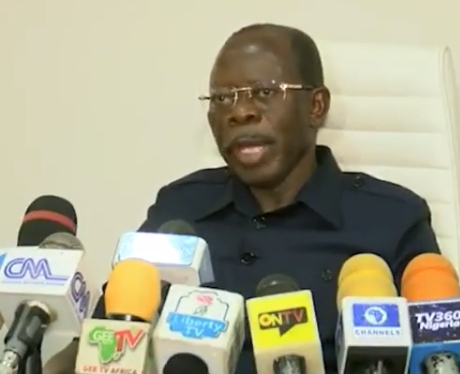 Adams Oshiomhole, the immediate past national chairman of the All Progressives Congress (APC), says he has accepted the decision of the party’s National Executive Committee (NEC) to dissolve its National Working Committee (NWC) which he led before his suspension.

Oshiomole said this while speaking to newsmen in Abuja today Saturday, June 27.

Recall that the party’s NEC dissolved the Oshiomole-led NWC  on Thursday, June 25 following his suspension by a ruling from an Abuja Court of Appeal.

Speaking at the press conference, Oshiomle said he has taken the dissolution of the NWC in good faith, and that he has no regrets over the decisions he took while he was the national chairman of the party.

“The APC under my chairmanship has done its best and the results are there. Of course we have now been dissolved and I have accepted that dissolution in good faith.

I’m not going into the question of legality or illegality. The bottomline is that the president who invited me to lead the party and who mobilised all the support across the country for my emergence as chairman also presided over the meeting where the NWC has now been dissolved.

I have always assured the President of my loyalty and as a demonstration of my loyalty to Mr. President, loyalty to our party and loyalty to the Nigerian nation, I have decided to accept the decision in good faith and to maintain my loyalty, my respect and my admiration for President Muhammadu Buhari.” he said

Watch a video of him speaking below